John was a skilled timber sale forester. I never had the dubious privilege of working with old John. I talked with several young foresters back in the early years of the 50’s who had, and they assured me that the tales they told were accurate descriptions of the way John trained new foresters. This is what they said.

In those days, timber sale layout was a straightforward job. It included the locating of timber stands, surveying, mapping and marking the boundaries of clear cut units, and cruising the timber for volume and grade. Cruising was done by measuring and/or estimating the individual trees within sample plots within each unit.

The field work was strenuous, and the measurements needed to be exacting and accurate. The surveys and data were the basis for appraisals that set the minimum price required to bid on the timber offered. Timber was valuable and hundreds of thousands of dollars were at stake. We carried measuring tapes, Abney levels, staff compasses, clip boards, altimeters and cruise cards to record data. We wore cruiser vests to carry most of the gear, but we were usually burdened with axes, and Jacob staffs in our hands. All that gear slowed up travel, and limited the effective distance that we could walk in for a day’s work.

Since this work was done before the roads were built, or even surveyed, the job usually required staying out in the woods for extended camp outs. It took time to complete the work. Most sale layout crews tried to do the close work from home, and when camping out was called for, it was usually for 10 days at a time, with 4 days off. That schedule allowed us to make the logistics easier, and give the forester some time with his family. Usually, we carried in a good tent, camp stove, sleeping bags and some amenities, like lanterns, plates, cups, silverware, a mirror, and some folding stools to make camp life a little more comfortable.

Not so for John, who prided himself on being self-reliant. I guess he felt that luxuries in camp were an unnecessary burden. In fact, the camp site itself was unnecessary.

This tale took place on the remote North West part of the Olympic National Forest. This was at a time when logging roads were just being built into the back country, and most of the drainages were still roadless and included a lot of rugged territory. Walking was the only travel available, and trails were few and far between. A walk might start along a trail, but a lot of the hiking was cross-country, with only primitive or game trails for most areas foresters worked in.

According to the stories, a new forester would arrive at the District office, and John would be ready to leave. With no introductions, they would pile into John’s pickup and drive to the end of the road. There they would pack up a few supplies in small day packs and begin walking.

After several miles of strenuous hiking, they would arrive at a marked unit. John would then hand the young forester a set of tally cards in a clip board, and start calling off dimensions. This would go on for 4 or 5 hours without any break, when they would stop for a short lunch break.

After maybe 15 minutes, John would get up and announce it was time to go back to work. They would set off again at a brisk pace and continue for another 5 hours, paying no attention to the time or weather. They would break again for a brief supper, typically consisting of a couple of sliced potatoes and some diced ham or bacon, fried up in a filthy old frying pan produced out of the bottom of his old pack and cooked over an open fire.

When the meal was finished, the fire would be put out and cruising would resume until darkness came, making writing impossible. John would look around, find a convenient log or tree root, pull out an old army blanket, roll over and go to sleep. At first daylight, they would be up, and after a short fire and a breakfast of more potatoes, possibly with bacon, they would resume timber cruising. The routine was rigorous and unvaried, and continued until the cruise was complete, or the Junior Forester simply revolted or collapsed. Two or three weeks was a typical period of time to complete a cruise.

They told me that anyone who completed a two week training assignment under John was considered by the brass in the Supervisors office to have proven himself and he was ready to be taken off probationary status!

By Robert Schramek. This book recalls the experiences in the life of a forester. This was back when work was done in the old ways, with hand tools that the woodsmen and surveyors of earlier days used. The days were long and the work was hard. 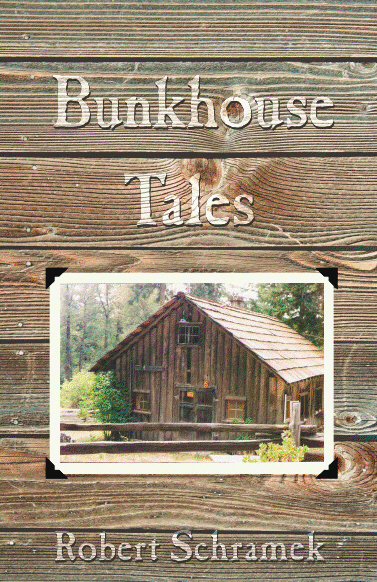 We took chances that most would shy away from today. It would be foolish to call those days tough or romantic. But those of us who lived that life during those years look back at our experiences as fond memories of a life and a culture that no longer exists. My grandchildren wanted to hear these stories. You too may find them enjoyable. Travel back with me to those days.
— Bob Schramek, author.
US Forest Management, 1954, University of Minnesota

Conflict in Our National Forests: The War between Science and Politics

Robert Schramek is a retired forester living in Port Townsend, Washington. He worked for the U.S. Forest Service from 1953 to his retirement in 1985. His work for the Agriculture Department’s Office of Inspector General in 1978 – 1982 resulted in citations of appreciation for saving over a million dollars in costs to the Department. 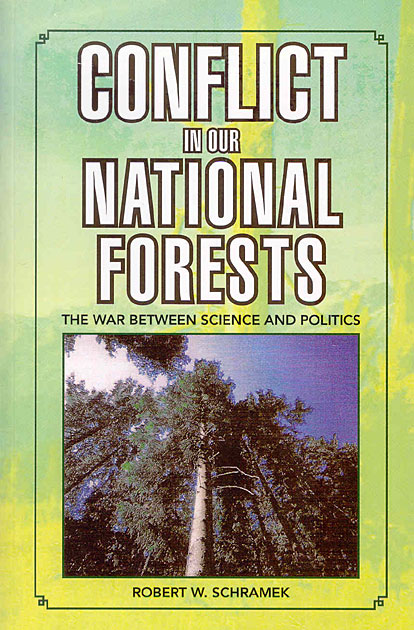 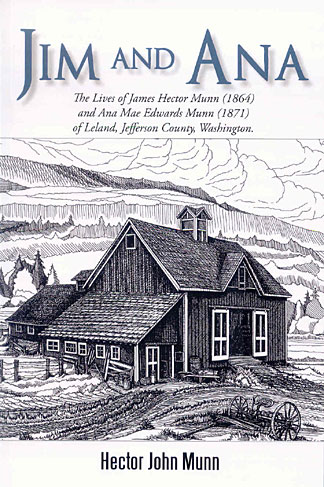 Fast Moving Water: Images and Essays from the Hoh River

This collection of images and essays takes you on a tour of a last great American river, from its headwaters to the sea. They trace the importance of the Hoh River, both ecologically and culturally, in its unique geographical and historical context. Through varied perspectives including those of tribal chief, homestead family descendant, logger, fishing guide, environmentalist, scientist, politician, artist, and more these essays portray deeply passionate connections to the river

Stunning images by Quilcene’s own renowned nature photographer Keith Lazelle bring this remote river wilderness to life, from its source high atop 8,000 ft. Mt Olympus through one of the world s last intact temperate rain forests to its mouth along Washington’s rugged Olympic Peninsula. 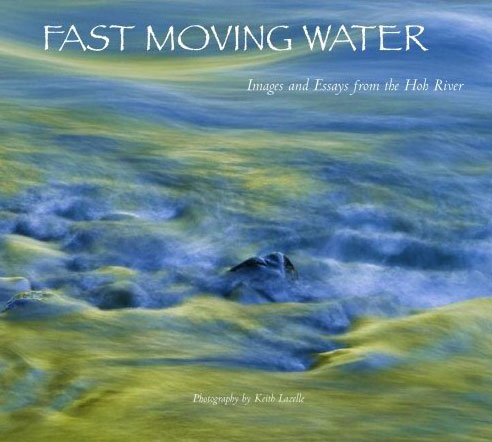 BRINNON … A Scrapbook of History 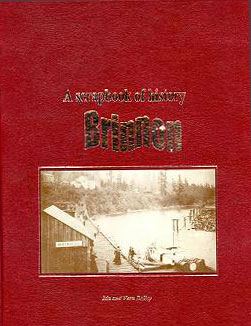 BRINNON … a Scrapbook of History by Vern and Ida Bailey

Sites in this 498 soft-bound guide are grouped by travel region.  Sites are listed in alphabetical order by county within that region.  Official Washington State Highway maps are used for each county.  Historic sites, State and National Parks, museums and privately operated facilities are also included.  Telephone numbers, entrance fees and historical building information; as well as other publication listings make this a useful and informative guide to Washington State.
Discover Historic Washington State    $8.00  ($3.00 shipping and handling)
By George & Jan Roberts, 1999.  Published by Gem Guides Book Company. 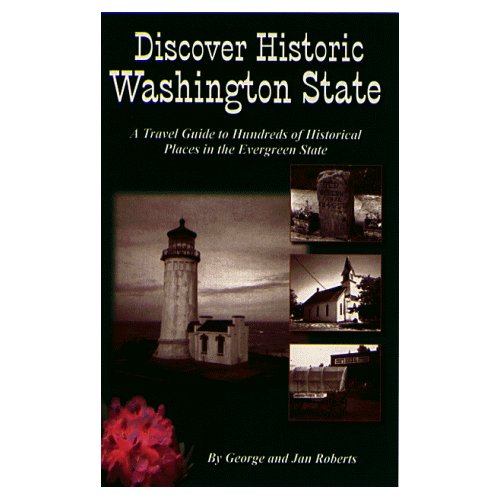 Home Cookin’… from Quilcene and other Northwest Kitchens

This 75-page soft cover, spiral-bound cookbook is divided into 6 main categories: Appetizers & Beverages, Soups & Salads, Main Dishes, Breads & Rolls, Desserts and Miscellaneous.  It is a collection of favorite recipes from Quilcene and other areas of the Pacific Northwest.
Home Cookin’… from Quilcene and other Northwest Kitchens    $8.00 ($3.00 shipping and handling)
By Quilcene HS Honor Society, 1998.  Published by Cookbook Publishers, Inc.

King of the Sea World

This novel, a whale of a fish tale, is a fantasy adventure woven around the life-cycle of the Pacific Northwest Chinook (King) salmon.  It turns into a five-year world cruise, from the Big Quilcene River of the Olympic Peninsula to the autumnal waters of the South Pacific off Antarctica.
King of the Sea World    $13.00 ($3.00 shipping and handling)
By Leo Haukkala, 1993.  Published by Quimper Press

Covering the greater Northwest timber belt, this 188 – page 10” X 13” hard cover book is thoroughly illustrated with beautiful colored photography by the author.  Separate chapters on the logger’s work tools and way of life and especially on the new methods of regenerating timber as a crop make this a valuable record of one of the Northwest’s largest industries.
Timber Country Revisited   $22.00 ($5.00 shipping and handling)
By Earl Roberge, 1991.   Published by Washington Contract Loggers Association